The euro area recovery has been rather disappointing. Economic growth remains stuck on slow gear with covid restrictions making a comeback in several countries recently. The labor market is not impressive either as the unemployment rate is still elevated at 7.2%.

On the other hand, inflation has fired up dramatically. Consumer prices are rising at the fastest clip in decades, sparking speculation that the ECB will be forced to raise interest rates soon. Money markets are currently pricing in 15 basis points of rate increases for this year. However, that seems unrealistic. 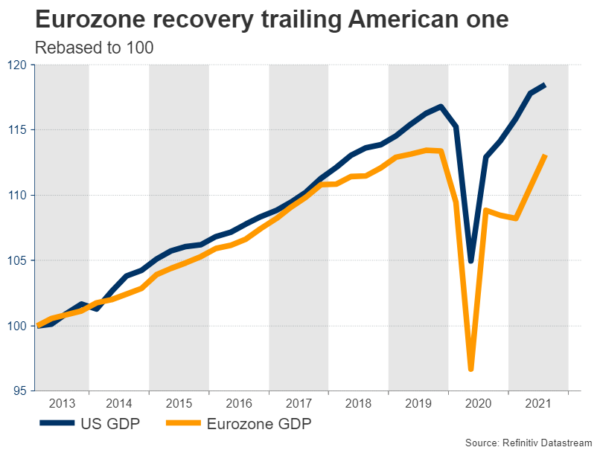 The primary difference between the ECB and the Fed is wage growth. Whereas American wages have picked up amid a labor market that’s approaching full employment, the same hasn’t happened in Europe. This means that there is little ‘organic’ inflation, so price pressures could cool once supply chains come back online and energy prices stabilize.

ECB President Lagarde argued the same point this week, when she said ‘the cycle of economic recovery in the US is ahead of that in Europe, so we have every reason not to act as quickly and ruthlessly as one might imagine with the Fed’.

The upcoming business surveys are expected to confirm this narrative. Both the manufacturing and services indices are forecast to decline a little further in January, which would signal that economic growth is slowing as measures to combat Omicron begin to bite. 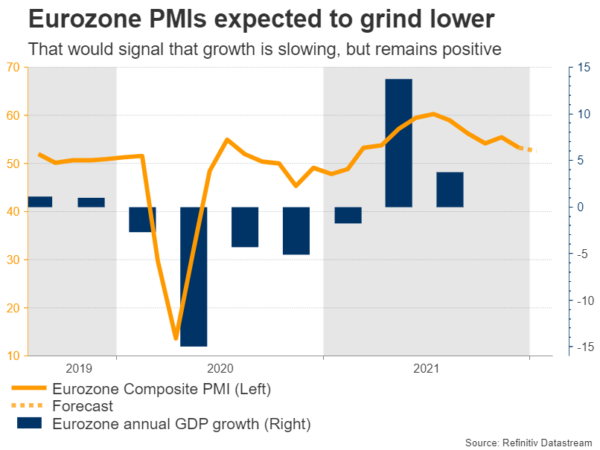 On the bright side, such numbers would imply that growth at least remains positive, so the economy probably absorbed the latest round of restrictions with less damage than previous waves.

In the FX market, the initial reaction in the euro will depend on any surprises in the PMI figures relative to the forecasts. Taking a technical look at euro/dollar, a disappointment could see the pair head lower to test the 1.1270 zone again. On the upside, preliminary resistance may be found around 1.1370.

In the bigger picture, the next few months could be tough for the euro. The obvious risk is the ECB disappointing market expectations. The European economy simply doesn’t look strong enough to sustain higher rates and subdued wage growth implies that inflation could cool by itself moving forward.

Another headache for the ECB is how the bond market might react to higher rates. The European bond market has become accustomed to extraordinary levels of stimulus, so pulling that back would risk a sharp spike in yields, especially for economies with high debt levels like Italy. Such a spike could dampen the entire recovery, so the ECB cannot hit the brakes too hard.

Political risk is also back on the radar. The French presidential election in April is approaching and President Macron will have to face off against challengers who are skeptical of further EU integration.

All this suggests that the risks surrounding euro/dollar remain tilted to the downside for now. But it could be a different story in the second half of the year. If the European labor market eventually gets rolling and that also coincides with ‘peak inflation’ in the US, it may be enough to turn the tide for the pair. Buckle up, it could be a stormy year.