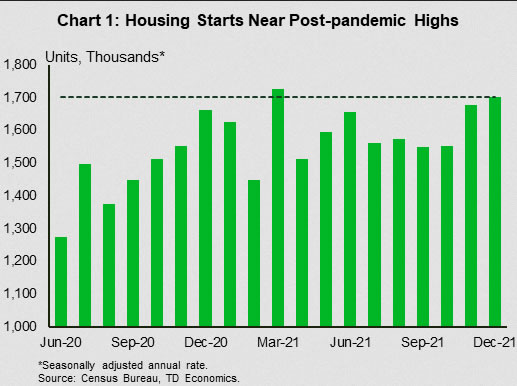 This week’s data releases showed some slowing in U.S. economic momentum through the winter months. In line with last week’s reported pullback in retail sales, existing home sales took a tumble in December. The soft patch looks to have continued at the start of the year, with both the Empire State and Philadelphia Fed manufacturing surveys weakening to multi-month lows in January.

Fortunately, it wasn’t all bad news as housing starts exceeded expectations, hitting their highest level in nine months in December. The virus-induced demand slowdown is likely to prove temporary, and the supply side of the economy is still playing catch up. The Federal Reserve is likely to signal as much at its meeting next week, setting the stage for policy rate liftoff at its following meeting in March.

First up, the good news. Wednesday’s release of December’s housing starts data showed homebuilders are adding supply to a market in dire need of it (Chart 1). Starts rose to 1.7 million units (annualized) in December, a 1.7% increase over the prior month. The gain built on upward revisions of 49k units in the prior two months. The improvement was entirely in the multifamily segment, which posted a 51k unit increase (+10.6% m/m), while the single-family segment pulled back 27k units (-2.6% m/m). As starts perked up, so did permitting activity. Permits were up 9.1% for the month, rising to 1.9 million – the highest reading since July 2020. As with starts, this was mostly a multi-family story as permitting in the segment rose 21.9%, dwarfing the 2.0% lift in the single-family segment.

Homebuyers, on the other hand, showed some hesitancy in December. Existing home sales fell 4.6%, undershooting the market consensus for a 0.5% pull back. Surging Covid cases and a lack of inventory explain the setback. At the current pace of sales there exists only 1.8 months’ supply of homes – half the 3.9 months’ average in the three years before the pandemic.

This is an extraordinarily tight housing market, and with demand still strong it’s no surprise that the median transacted price again registered double-digit year-over-year gains – accelerating to 15.8% from 14% in November. The sharp rise in prices has worsened affordability. Higher interest rates will exacerbate this challenge and are likely to slow demand growth over the next year. The silver lining is that higher prices and higher carrying costs should lead to more supply in both the existing and new market, helping to rebalance the market.

Finally, softening economic conditions were reflected in the Empire State and Philadelphia Fed Manufacturing surveys in January. On an ISM adjusted basis, both pulled back for the month registering 54.4 and 57.6, respectively. While readings above 50 imply the expansion continued in January, the Empire state index is now at its lowest level since January of last year, while its counterpart out of Philadelphia is now at its lowest level since August.

That said, this week’s data reflect a temporary blip in the path of the recovery. The Fed will remain focused on the broader trends – strong growth and persistent shortages – as they start the rate hiking cycle in the coming months.

Canada – To Hike or Not to Hike (in January)

After being starved for data last week, we were treated to a buffet this week. There were updates on the housing market, retail sales, and perhaps most importantly, inflation. In addition, the Bank of Canada (BoC) released the Business Outlook Survey (BOS) and the Canadian Survey of Consumer Expectations (CSCE).

First, on the residential front, December data showed that Canadian housing markets remained hot at the end of last year. Existing home sales rose 0.2% to 54.4k units, the highest level of activity since May 2021, while home prices rose 1.5% as housing inventory fell to its lowest level on record in December. Excess exuberance appears to have taken hold in some residential markets. Buyers have purchased homes in the belief that price growth will continue unabated. This poses a growing vulnerability in the economy, and is one that the BoC is closely monitoring.

The central bank is also keeping a watchful eye on bubbling consumer price pressures. December data released this week had inflation at 4.8% in year-over-year terms, the highest reading since 1991. Goods prices have driven the increase, but services prices have also picked up recently as price pressures broaden across the economy (Chart 1).

Indeed, wage growth has not kept up with inflation, despite labour shortages across a number of industries. This may change in short order, however. The majority of firms surveyed in the BOS said they planned for larger wage increases to attract and retain workers. Some are even planning to catch up on pay raises that were shelved earlier in the pandemic. If businesses follow through on these promises, we could enter a wage-price spiral, meaning inflation could remain elevated for some time.

The Bank of Canada is mindful of the risks to inflation. In October, the Bank became decidedly hawkish. It ended quantitative easing, and adjusted forward guidance, committing to keep the overnight rate at 0.25% until the middle quarters of 2022. The Bank re-affirmed this view in December. However, with longer term inflation expectations threatening to become un-anchored, the Bank may be tempted to abandon its forward guidance and hike next week. If it does, it risks diminishing the power of this tool. Instead, the Bank may use January to set the stage for lift off in March. Regardless of the decision next week, its clear that we will soon be saying au revoir to rock-bottom interest rates.